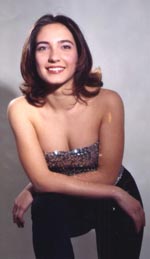 Dancer, choreographer and teacher, she has a Bachelor’s degree in disciplines of dance and a specialization in classical ballet at the National Academy of Dance (Rome, Italy). She studied ballet with the principal dancers of the Opera of Bucharest, Sofia, Odanowsky and contemporary dance in Italy, London, New York, Amsterdam and Berlin. She has worked in theater and danced with Paola Scoppettuolo in Italy and in Berlin. She danced and choreographed for the ballet of the AND, for events and performances sponsored by the City and Province of Rome. For MThI, she choreographed the project Traffic Art-Art by You with 60 children from various countries, event entered the Guinness World Records (Dubai 2010). She danced and choreographed for the International Competition of poetry Mario Luzi, the Certamen Vaticanum and for the presentation of the book by Federica Taddei, RAI journalist. Stage movement trainer for actors, in theatre she has worked with directors such as Lydia Biondi, Annalisa Biancifiore, Paolo Vanacore. She danced and choreographed in the Festival Escape Routes, Escape from dance, Linea35, Jeux d’Art at Villa d’Este, Ludi Romani, Cerealia, FuturRoma. She has performed at the Teatro Due Rome, Teatro Quirino, Greek Theatre, Teatro Argentina, Auditorium Parco della Musica. She has been part of the Underground Dance Company in New York and Company’s Ballets A. Rendano. She has danced with the company Extralight K-Events in the Gala Presentation of the film Danny the Dog (Warner Bros). Semifinalist at the International Choreography Competition “Premio Roma Danza, 2011”. Assistant director for the dance documentary on Petra Conti ​​by the director Giancarlo Matcovich for Classical-Sky. Choreographer and teacher of folk dances and stage movement trainer for actors in the European project European Polytheatre: Cultural Awareness and Expression Laboratory (LLP, 2012-2014), with MTM mimoteatromovimento. As part of this project she is choreographer and performer  in the workshop held by Transversal Theatre Company of Amsterdam ​​(Sweden, October 2013). She holds regularly workshops of dance and stage movement for actors, workshops of ballet for  Roma in Danza.  She teaches also academic technique Vaganova Method, propaedeutics dance, contemporary and modern dance, composition-improvisation choreography, baby ballet. Teacher of Pilates CSEN-CONI. Artistic director and founder of the Stefania Toscano dance company. Member of MThI and head of its dance department.