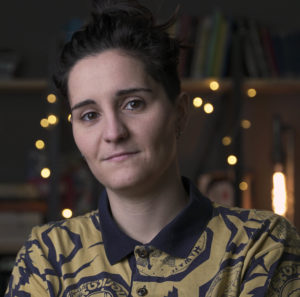 Linda Bagalini. Graduated with full marks in Philosophy from the University of Macerata with a thesis in ancient philosophy on “Aristotle and women: between evaluation and discrimination”, she moved to Rome to attend the master’s course “Cinema, Television and Multimedia Production” at the Roma Tre University. While attending the university master she graduated with full marks from the Roberto Rossellini Foundation ITS as Videomaker for Cinema, TV and Web. Since 2016 she has been working as a freelance videomaker. In 2018 she started working as assistant director in the film industry taking part in international projects of production companies such as Netflix, Sky, Fandango and Greenland. She has directed two short films, NotEnough TooMuch (2016) and Salve Regina (post – production), and two video clips, Cara Amica Blu, Alice Caronna (2019) and Le cose più belle, Sete (post – production). In 2020 she co-produced and co-directed her first work entitled Le Sfavorite – No Bets On The Underdogs, a documentary that deals with gender discrimination in sport, currently being distributed. Together with two other filmmaker colleagues she founded in 2020 the collective “Capibara productions”.