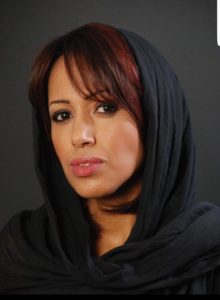 After attending the Theater School in Marrakech, she worked in Morocco in theater and cinema productions (Le prince arab, Jesus, Il Gladiatore), also participating in Arab films and commercials. After moving to Italy, she has worked in various theatrical productions (since 2003) of the company Laboratorio Integrato Superdiverso and DMA Teatrodanza in international festivals (10th European Dance Festival-Rialto Theater, Limassol Cyprus; International Festival of Theater de Marrakech- Théâtre Royale, Marrakech) with the Canino Cultural Workshop. Directed by Caterina Casini she acted in the ODISSEA readings in music and participated in the production Oggi stò così (Festival International du Théâtre Universitaire de Marrakech- Théâtre DAR ATAKAFA). The collaboration with M.Th.I. started in 2016 on the occasion of the VI edition of the Cerealia Festival, for which she curated the events dedicated to Morocco, partecipating also at the reading of poems by Dalila Hiaoui. Always with the M.Th.I. she acted in the show i4elementi, which debuted at the Festival International du Théâtre de Khouribga (Morocco), winning the Best Subject Award. She has collaborated with ST-ART in the shows Il viaggio and Princess before a Party by Stefania Toscano, the latter presented at the International Festival of Theater des Chef de Chefchaouen (Morocco). For television she has participated in various programs, including the episode on the Arab woman for Fox sex educational show and provaci ancora prof. 5 produced by Endemol. In the cinema in Italy, she was in the short film La seconda famiglia, dubbing the Grays Anatomy S14 (SDI MEDIA ITALIA), Come un gatto in tangenziale (Voltumna Film). She has curated choreographies of traditional dances of Morocco and for the Cerelia Festival the scenography of “Casa Marocco”.