The project PPP3.0 – Diritto allo scandalo includes the multimedia docu-theatrical show “Padre Nostro – diritto allo scandalo”, based on several interviews released by Pasolini, as well as a collection of verbal testimonies, in the form of P3ODCAST. These are the voices of the roman citizens called to express themselves according to their conscience on the “scandalous” issues faced by show: sexuality, power, relations between the state, mass media and citizens. The collection and dissemination of these podcasts will accompany the tour of the show in the urban areas where the network of Teatri in Comune – Tor Bella Monaca, Quarticciolo and Lido – is located, welcomed in the homonymous theaters. The podcasts will then be available on the main online platforms (Spotify, Audible, Spreaker etc.) for future reference of the project. 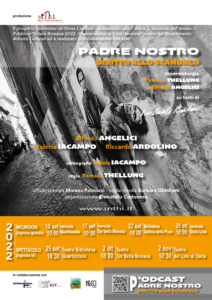 PPP3.0 – Diritto allo scandalo is produced by Music Theater International in collaboration with The International Theater and KIT Italia. The project is the winner of the Public Call “Estate Romana 2022 – Riaccendiamo la Città, Insieme”

The show “Padre Nostro – diritto allo scandalo” put together speech and acting with dance, music, projections, live footage with the involvement of the audience. The text crosses Pasolini’s writings, interviews and films, taking its cue from one of his highly provocative “prayers”: “Our Father who art in heaven, what do I do with the fear of ridicule? What do I do with my good education? I will chat with you like an old woman.” Thanks to the multimedia suggestions that help a contemporary reading, the words of the controversial author are proposed on stage by three actors, finding their way through interpretation, dance and images, reaching the audience and interacting with it, with a great emotional impact that facilitates its fruition. The goal is to make the figure of the intellectual and his “high” thinking human and accessible, highlighting some of those “scandalous” aspects and those elements of rupture inherent not only in Pasolini’s writing, but also permeating his personal life and in his way of being. Elements that emerged in his highlighting, contesting, fighting and arguing against the same civil society that has attempted, through complaints for insult, pornography, contempt to religion, solicitation, robbery, etc. to destroy the powerful image of the artist. The scandalous elements of Pasolini’s works, in a profoundly Catholic and respectable country like ours, have always undergone attempts at cover-up and cancellation.

The original interviews included in the show will be contrasted with the interviews collected “in the street” that bring people’s feelings and moods closer together. These voices will be collected in the form of P3ODCAST that will remain available on the main online platforms. The two parallel narratives, the theatrical one and the audio one, will intertwine the temporal planes giving back a choral vision, in which the prophetic voice of Pasolini finds confirmation and echo in the voices of those who today are witnessing the fulfilled prophecy. In order to stimulate an interaction with the places that will host the show, the artists will wonder in the streets of the city with microphone and camera to collect moods and feelings of everyday life, offering the population the opportunity to express themselves on the issues faced on stage. The voices of the territory, collected and edited, will then be disseminated in the foyers of the theaters, welcoming the audience before and after the show, reverberating as in an agora. Then, they will remain available in the form of P3ODCAST on the page dedicated to the project on the production website (www .mthi.it). 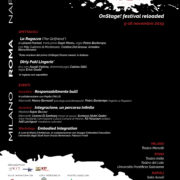