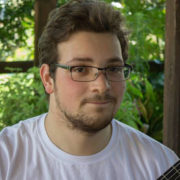 Michele Di Filippo (1994), is a young guitarist and composer. He had the opportunity to improve is music skills with teachers from the guitar world. He graduated with honors in guitar from the Licinio Refice Conservatory of Frosinone (2017). He has recorded two CDs of his guitar pieces: “The Sound of the Soul” (2011) and “The Journey” (2013). In 2017 he graduated the I level Academic Diploma in Composition for Film Music at the Saint Louis Collage of Music in Rome and in 2019 he graduated the II level Academic Diploma in Composition at the Licinio Refice Conservatory of Frosinone. He performed with Saint Louis in various concerts also conducting his own compositions for orchestra at the Auditorium Parco della Musica and at the Eliseo Theater in Rome. Since 2013 he has collaborated with MThI as a guitarist, composer and music arranger